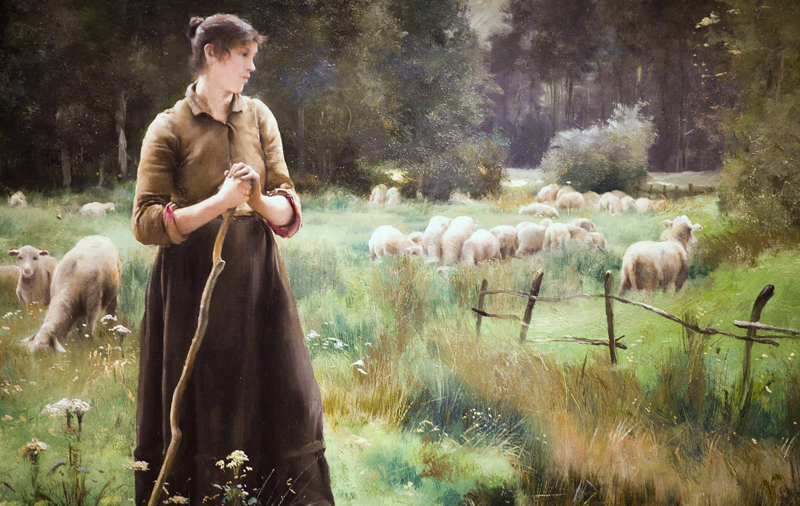 Dupre, Julien, 1851-1910.  Images of women agricultural workers became a popular subject in French painting of the mid-late 19th century. Julien Dupre drew on that popular theme and moved it to allegory, with the naming of a shepherdess as the “good shepherd.” Christ, the spiritual Good Shepherd, becomes a calming presence without being pictured, simply by the artist’s use of sheep, staff/rod, and one who tends the flock. Date: late 19th-early 20th century

15Now all the tax collectors and sinners were coming near to listen to him. 2And the Pharisees and the scribes were grumbling and saying, “This fellow welcomes sinners and eats with them.” 3So he told them this parable: 4“Which one of you, having a hundred sheep and losing one of them, does not leave the ninety-nine in the wilderness and go after the one that is lost until he finds it? 5When he has found it, he lays it on his shoulders and rejoices. 6And when he comes home, he calls together his friends and neighbors, saying to them, ‘Rejoice with me, for I have found my sheep that was lost.’ 7Just so, I tell you, there will be more joy in heaven over one sinner who repents than over ninety-nine righteous persons who need no repentance. 8“Or what woman having ten silver coins, if she loses one of them, does not light a lamp, sweep the house, and search carefully until she finds it? 9When she has found it, she calls together her friends and neighbors, saying, ‘Rejoice with me, for I have found the coin that I had lost.’ 10Just so, I tell you, there is joy in the presence of the angels of God over one sinner who repents.”

Readings are from the online Revised Common Lectionary, a project of the Vanderbilt Divinity Library, a division of the Jean and Alexander Heard Library.

Scripture texts are from the New Revised Standard Version of the Bible, from the Oremus Bible Browser.